Born in Dutch-Indonesia, from a Dutch-Norwegian father and a Javanese-Chinese mother, Toorop spent his childhood on the island of Banka and was sent at the age of nine to Batavia to receive a better Primary School education. Memories of the exotic atmosphere of his early youth stayed with him throughout his life and influenced him deeply.

Arriving in the Netherlands about 1872, he housed with relatives and connections in several places before, during the years 1876-1878, following courses at the Polytechnical School in Delft. Thereafter he enrolled as a student at the Rijksacademie in Amsterdam (1881-1882).

Together with his Academy-colleague Antoon Derkinderen he left for Brussels in 1882, where he enlisted as a student at the Royal Academy of Fine Arts (1882-1884). Soon he became involved in the Artists’ Society L’Essor and its successor Les XX, the latter he joined in 1884. There he met among others Henri De Groux, Théo Van Rijsselberghe and James Ensor. The latter taught him to paint with the palette knife. For a while, Toorop lived in the nearby village Machelen-De Haeren with Henri De Groux. At the local inn there, he met the Belgian artist William Degouve de Nuncques, who became a very good friend.

1885 saw him with Ensor in Paris; Toorop travelled on to Italy – only to realize that the old Flemish artists meant more to him than the Italian ones. In the same year 1885, he also travelled to England where among others he visited James Whistler. His marriage in 1886, to the Irish-English Annie Jane Hall whom he first met in Brussels, rung in a new period. After lodging in England for a while, the couple returned to the Netherlands, where Toorop soon became a ‘renewer ‘of Dutch art. He was the one, who introduced Seurat’s Pointillism in the Netherlands.

In 1887 the Toorop’s first child, a girl, had died shortly after birth. In the same year, Jan Toorop partly recovered from a neglected venereal disease, which would bother him throughout his life. Through his illness, the loss of his daughter and the consequently developed cracks in his marriage, he was probably the more susceptible to the somberness and fatality thoughts that lurk in symbolism. Around 1900, Toorop was at the top of his fame, in particular with his symbolist works, which for instance in his use of Wajang-motivs in their ornamental composition show the influence of his childhood memories. He exhibited everywhere in Europe, in the years 1883-1893 especially in Belgium, the Netherlands and Paris, between 1894 and 1909 among other places in Berlin, Munich, London, Copenhagen, Dresden, Vienna, Krakow, Venice, Zürich and Düsseldorf. He inspired many artists, among them the Austrian Gustav Klimt.

About 1890, the Toorops settled first in Katwijk aan Zee, where their daughter Charley was born, then in Amsterdam, The Hague, Nijmegen, The Hague again and, as a holiday resort, Domburg. Charley Toorop (1891-1955) also became an artist, achieving a hard-won style of her own, a kind of expressionist realism.

It was thanks to Jan Toorop’s very charismatic personality, that his many friends from different disciplines followed him to all his stations; his colleagues, art critics, art collectors and, of course, poets, musicians and writers, who were inspired by his work as well.

They also followed him to the seaside resort and Artists’ Colony Domburg, where he stayed several times before the turn of the century and then almost yearly from 1903 until 1922. There he became, together with Piet Mondrian, the leading representative of Dutch luminism, which reached its peak in the years 1908-1911 and was inspired by French impressionism, neo-impressionism in a broad sense, and the work of Vincent van Gogh.

In 1905, Toorop officially had become a Catholic. Though he continued to work in all the different styles and methods that had inspired him – Impressionism, Symbolism, Art Nouveau, Neo-Impressionism and even a beginning of Expressionism; while exploring the graphic arts, ceramic and glass designs next to illustrations for book covers and even reform clothing – in his later years he more and more concentrated on religious and mystic themes. He died in 1928. 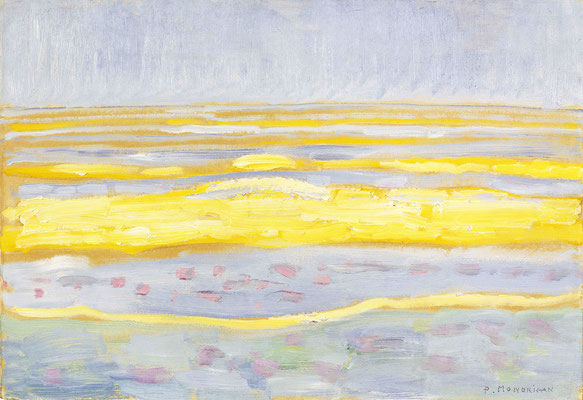 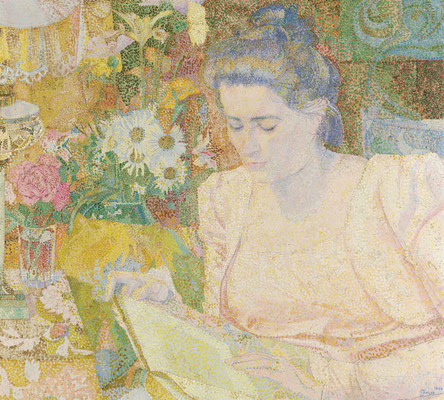 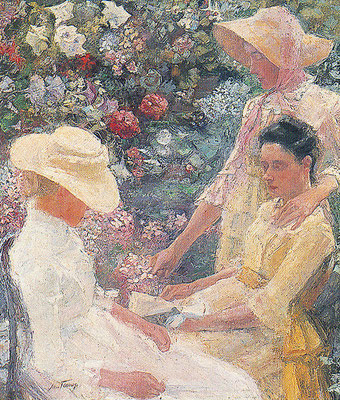