The name of Moret-sur-Loing is inseparable of the Sisley’s one… Born in an english family setting up in Paris, Sisley came to London when he was eighteen years old; his father wishes he acquired a business training in this city but the young man visited London museums where he discovered Bonington, Constable, Turner… When he return in France he worked on Fontainebleau Forest as it’s possible to see it now in the account-books of Ganne inn in Barbizon. Then he followed the courses of Gleyre’s workshop in Paris where he met Bazille, Monet, Renoir before to set up together in the Cheval Blanc Inn to paint the Fontainebleau Forest.

In 1864 Sisley received Renoir at Neuilly-sur-Seine where he had his workshop but his themes show that he went frequently in Paris and its surroundings. For example, he returned to Marlotte of which he represented often the main street. These paintings where accepted in the official Parisian Salon two years later in 1866, but his canvas where refused the following year.

In the 1867 summer a Monet(s letter to Bazille reported that Sisley and his wife stayed in the famous Honfleur’s Saint-Simeon Inn.

The 1870/71 events and his father’s death maked a turning point of his life because he must be able to feed his family with his art… During the revolutionary “Commune de Paris” he return to London where he met Pissarro and Durand-Ruel, the famous gallery owner, who bought and exposed a lot of paintings, many of them inspired by the Seine river. Excellent landscape painter, influenced by Camille Corot, “the master of the landscapes”, Sisley showed the places where he used to live, always near the Seine and its tributary, the Loing.

When he set up at Voisins-Louveciennes, where Pissarro was living, Sisley painted the Seine riversides in Marly-le Roi and Port-Marly which was represented during the 1910’s flood… Argenteuil where he met Claude Monet, inspire him as Bougival and its lock-gate then, in 1874, he participated at the first Impressionist exposition with seven canvas of which the art critic Ernest Cheneau said: “In the past and now I didn’t know a picture which gives a physical sensation of the atmosphere, in the open air, with a so perfect way”.

During the summer he return to London with a fan of him, the famous singer Jean-Baptiste Faure and he painted the Thames, the sailing ships, the yacht-races, the canal-boats…

Upon his return t France, he set up in Marly-le-Roi which he represented under the snow during the winter; He showed ten oil canvas at the second Impressionist exposition and Emile Zola said: “Sisley is a landscape painter with a great talent. He knows how to paint snow with a remarkable correctness…”

Afterward the artist participated to the most impressionist expositions because he was prolific and he sold very well his paintings, twenty of them where bought during the Drouot sale by option in 1875.  Two years later, he set up in Sèvres to be near Paris where he went by regular boats which served the capital and its surroundings.

In the gallery-shop of Legrand, who had worked with Durand-Ruel, he used to exchange some canvas for meals in the poet’s Murer restaurant who bought him 30 canvas while 13 others belonging to Ernest Hoschede, who failed in bankrupt, where sold in the sale by order of the court.

In 1880, losing his hope to be accepted in the official salon, Sisley moved to Veneux-Nadon, near Fontainebleau Forest. Since the middle of the century, the railway stations of Moret-les-Sablons and Saint-Mammes allowed to reach these places from Paris and from these stations a stage-coach brought people around… The painter put his easel in front of his house which was up the railway line and the roofs of Moret-sur-Loing where he set up two years later after spending 1880 summer at Ile de Wight… This village and surroundings became his favorite themes: for example  Saint-Mammes, at the Seine-Loing junction.

Downstream the By hamlet, where the animal painter Rosa Bonheur was living, attracted him. In June 1883, Sisley who didn’t sell anymore set up in Les Sablons not such much expansive than Moret and linked to Veneux-Nadon finally named Veneux-les-Sablons in 1922.

The artist didn’t participated at the last impressionist exposition in 1886 as Monet and Renoir, but others gallery owners as Théo van Gogh where interessed by his paintings of which some of them where exposed in New-York by Durand-Ruel two years later when Sisley set up definitively in Moret-sur-Loing.

Moreover his participation to the “Club des XX” in Brussels and those organized by Durand-Ruel in New-York, the painter joined the national Beaux-Arts Society created by the Parisian Salon’s dissidents. In 1893 he formed a friendship with Charles Lebourg and came with him temporarly in Rouen, after that he painted bridges and churches Moret’s series, influenced by the famous Monet’s cathedral.

Established in 1894 at Mesnil-Esnard in the Depeaux’s norman property the artist realized many canvas in Rouen, La Bouille et Sahurs which were presented I the National Beaux-Arts Society the following year. In 1897 six on his nine paintings of the Caillebotte’s legacy were fixed in the Parisian musée du Luxembourg. In February of the same year, the artist organized a retrospective exhibit with 146 canvas and 6 pastels without success. Thanks to the generosity of Depeaux, he spent again a new summer in England before returning to Moret-sur-Loing where he try to obtain the french nationality without result before dying of a throat cancer. For his children Monet organized a sale of his paintings which was the most profitable of the century…

For the art critic Gustave Geoffroy “Sisley was delicious and subtle with his indications of perspective and the transparency of the atmosphere and his painting’s charm remains” while another journalist, Georges Rivière, said: “In all the Sisley’s canvas, we find the same taste, the same delicacy, the same peace…”

As he lived the last years in Moret, he was buried near his wife who died four months before him, in the town graveyard under a rock of the Fontainebleau forest. 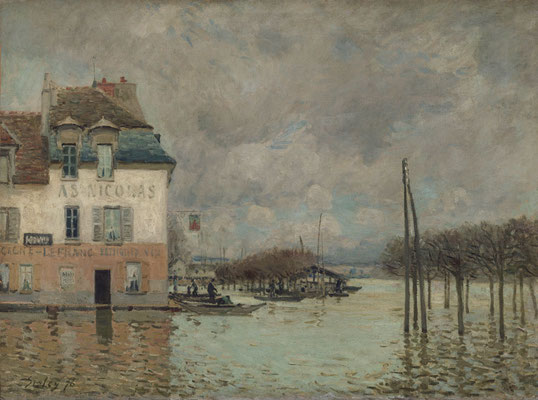 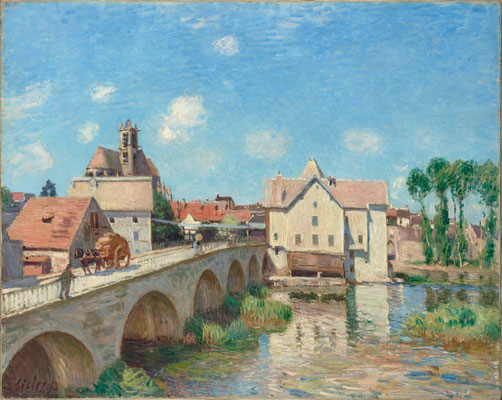 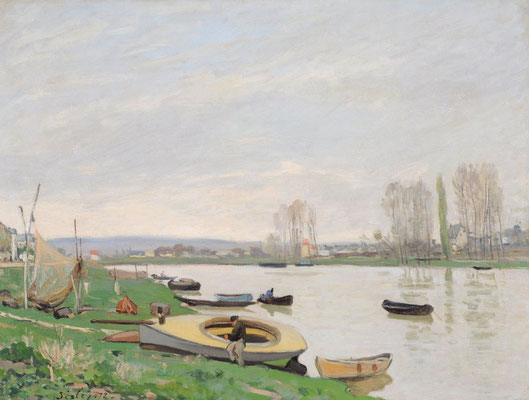