With freedom and independance, la “Grande Dame de l’Impressionnisme” surrounding by her friends respecting and caring for her with admiration, was fighting the rules of academic art choosing new harmony of colors on her easel, using light touches for painting, watercolor and pastel.

Berthe Morisot was born in Bourges in the French Department of Cher, where her father was Prefect.  She was the youngest with two daughters (Yves and Edma) and  a younger brother (Tiburce). Beginning in1857 the three sisters followed drawing lessons in Lyon from the painter Joseph Guichard who took Berthe and Edma to work in the Louvre museum before introducing them to Camille Corot. This encounter resulted in the family moving to Paris. In 1863, Achille Oudinot, their new teacher in Paris, introduced them to Daubigny, Daumier…

At the beginning of the following year, the paintings of Berthe were accepted in the Parisian Salon.  Two of these canvas were particularly appreciated by critics who looked with favour on this artist when she was exposing… In 1868 Edouard Manet, whom she had met at the Louvre, asked her to pose for his painting “Le Balcon”. The following year, her sister Edma, newly married, left for Brittany where Berthe joined her to paint.

Having stayed with her parents in Paris during the Prussian siege of the city, the artist and her mother took refuge in Saint-Germain-en-Laye during “the Commune”, following the advice of Puvis-de-Chavanne.

The following summer, Berthe was with his sister Yves in Saint-Jean-de-Luz where she again saw Corot; the two women then went to Madrid in 1872. Upon her return to France, she settled in Maurecourt in the Seine & Oise Department and this period corresponds to the full blossoming of her artistic personality, marked by the extreme delicacy of her clear and rapid strokes—a hallmark of the greatest Impressionists.

The death of her father in 1874 coincided with her interest in the first impressionist exposition which obliged her to renounce the Salon whose jury rejected  à priori the paintings of this new pictorial form. In December of that year, Berthe married Eugène Manet, brother of Edouard, whom she had met in Fécamp, in Normandy, during the summer.  She then worked in Manet’s property in Gennevilliers near Paris then at Cowes, on the Isle of Wight, before returning with her husband to London.

Between 1875 and 1885, she travelled with her husband in Belgium, The Netherlands and Italy, attracted by open space with water and changing light, where boats, sea, rivers, clouds and mist are captured with his brushes… After these travel in Europe, ‘there were no more excursions in other countries, excepted with brushes and colors on the footpath of the only world who loved” wrote his biograph, Dominique Bona.

Upon her return to France, she rejoined her two sisters: Edma in Maurecourt, Yves in Cambrai and continued to participate regularly in the impressionist expositions, with the exception of 1879, year of the birth of her daughter Julie who figured regularly in her subsequent works…

During the summer of 1880, the artist painted scenes of Beuzeval, Houlgate, then Nice and northern Italy during the following winter.

From 1881 to 1884, each summer the family rented a house in Bougival, before moving definitively to the 16th Arrondissement in Paris, where she received her friends each Thursday:  Degas, Renoir, Sisley, Fantin-Latour, Puvis-de-Chavannes, Rodin, Jules Ferry, Mallarmé…

In 1886 she worked on Jersey, then exposed the following year with the XX in Brussels, Durand-Ruel in New York and in international expositions of Parisian gallery owners.  During the winter 1888/89, she returned to the Côte d’Azur, where she rented a villa in Cimiez (Nice); upon her return to the Paris region, she set up in Mézy, not far from Gargenville, where Whistler and Renoir visited her.

After the death of her husband in 1892, she was invited to Valvins by Mallarme, to Giverny by Monet; she stayed in Portrieux, went to Brittany, especially to Nantes. She died three years later, having contracted influenza from her daughter. 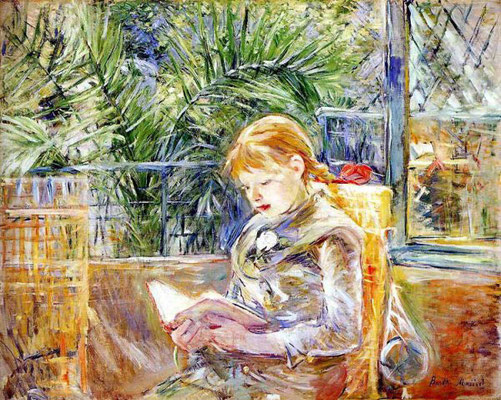 Bougival Berthe Morisot house, bought by the city for a museum project (2022)