Guillaumin is –may be- the most parisian of the impressionists painters.

He was born in Paris but his parents set up quickly in Moulins in the center of France (Allier) where they came from and where his father was tailoring. Here he became friend of Eugène Meunier, well-read man and collector, who became a restaurant owner under the name of Murer and played an important role in the life of the artist.

Guillaumin returned to Paris when he was sixteen years old to work with his uncle in a fashionable lingerie shop… Then he attended the drawing school of the capital; soon he got a job in the Paris-Orleans railway company. In 1861 he decided to follow the teaching of the Academy Suisse where he met Cézanne, Pissarro and, a few time after, he knew the pupils of Charles Gleyre: Bazille, Monet, Renoir, Sisley.

In 1869 he left the railway company to work at night at the parisian road system which allowed him to paint all the day long !... So he represented the places where he was working in the suburbs of Paris: Bercy, Ivry, Issy, Vanves. He stayed in Paris during the Prussian siege and “La Commune”; his anarchist tendencies brought him to the social struggles… After these bloody events, he went frequently to Pontoise where Pissarro was established and to Auvers-sur-Oise where he met Cézanne and Docteur Gachet who taught him aqua-fortis technic from 1872 to 1874.

The artist participed at the Impressionists expositions excepted two of them with numerous paintings… In 1881 his friend Murer left his Parisian restaurant in which Guillaumin’s canvas were shown to join Auvers-sur-Oise where these paintings were now presented.

In the same time Guillaumin discovered Damiette, a village in the Chevreuse Valley, which inspired him a serie of particularly lightening paintings.

In 1886 the artist sent twenty-one canvas to the impressionist exposition and Durand-Ruel exposed seven of his paintings in New-York. He married his first cousin, professor of literature, in 1887 and he took a new way in his art, organizing his own exhibit the following year in the offices of “La Revue Indépendante”. The same year he exposed with Pissarro and Van Gogh. Sometimes he travelled to Pontgibaud (Auvergne) where his mother was born.

In 1891 he was invited in Brussels by the “Cercle des XX” where he exposed with Seurat, Sisley, Pissarro, Signac , Van Gogh… and became the felix beneficiary of a lottery (100 000 francs), which gave him a large material independency, authorized him to retire and devoted all his energy to painting.

Then he traveled a lot: in Britanny (Dinard, Pornic), in Auvergne (Pontgibaud, Saint-Sauves…), in the atlantic coast (Ile de Ré, Saint-Palais…) and in the Côte d’Azur (Estérel, le Trayas, Antheor, Agay..).

Since 1893, he set up in Val de Creuse where he returned every year during the next thirty years. So he his the tutelary figure of the Crozant school and Creuse Valley : Crozant, Fresselines, Gargilesse which are the artistic pole of the region with famous representants: Léon Detroy (Gargilesse), Alluaud, Madeline and Monet who realized 23 canvas during a stay of 72 days in Fresselines in 1889.

In Crozant he met the young Otto Friez who was enthousiastic for  the original technic used by Guillaumin to crash the color on the canvas. This excess which had inspired the Fauves was not new in the Guillaumin art!

He died in 1827 in Grignon Castel near Orly. 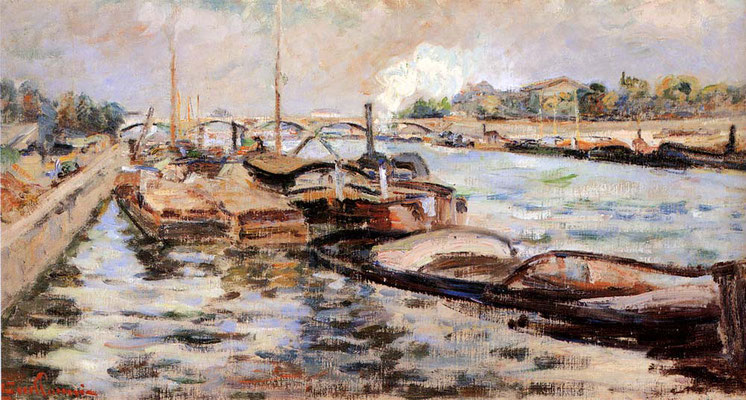 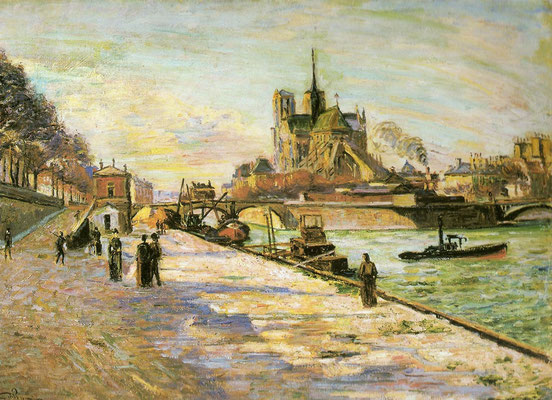 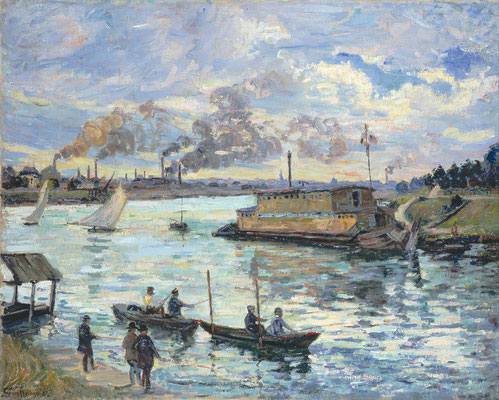