Grohar was the most lyrical personage in the Slovenian Impressionist decade at the beginning of the 20th century.

Endowed with exceptional talent he was born to rural proletarian parents in 1867, but his progress was always hindered by his social status. He received rudimentary painting instructions in Kranj and Zagreb and was drafted into the army at 22, but found military service distressing. He briefly deserted and was sentenced to five months in jail. After he was released from the service in Graz, he finished the vocational school there with honours in 1895.

The lack of formal education, however, prevented Grohar from attending the Academy in Vienna. He tried to improve his skills by sporadically visiting Munich from 1895 to 1900. Due to penury, he never stayed long. In all, Grohar spent only a few months abroad and depended on the Landstand grants for his artistic education.

By the end of the 1890s, the Church became a prominent supporter of his work, which at this stage was realist. The turn of the century also meant a watershed in his style.

At the age of 35, he quickly began to develop a painting technique of his own. He partly derived it from the divisionism of Giovanni Segantini, whom he studied in Munich and admired deeply, and related it to Symbolism and Art Nouveau.

When he participated in the Second Slovenian Art Exhibition in 1902 with his fellow Impressionists, his work was heavily criticized.

The failures, which included another incarceration in 1902, led him to Vienna in 1903, and the next year Slovenian Impressionists exhibited at the Miethke Salon there under the name of the Sava Art Club. Warm reception marked a shift in the public perception of the artist and of Slovenian modernists. The critics became more appreciative, but his circumstances remained dire. Commissions were rare even in Vienna and he had to leave the Austrian capital soon after the exhibition. Proud and optimistic to a fault, he did not often ask for help, only for chances to work. and his independent nature led him to Škofja Loka. He settled there in 1904 and worked alongside fellow Sava artists - Rihard Jakopič and Matej Sternen, and photographer Avgust Berthold. While in Škofja Loka, he painted his best works. Homeless from time to time, he experimented with painting techniques not just for art’s sake, but also in order to find an expression to which patrons would respond. Because he relied on the art market, he exhibited abroad as much as possible (Belgrade, Berlin, London, Warsaw). In Trieste in 1907, he was lauded for his work, but failed to sell much. He was evicted from his studio in Škofja Loka in 1910 and stopped painting. In 1911, a few days before he could have left for a study tour through Italy, supported by the provincial grant, he died in a hospital in Ljubljana, exhausted by tuberculosis and hardships of life.

Ivan Grohar approached art with instinct and was not attracted by theory. He was tall, taciturn and trusting. His oeuvre holds around 260 paintings of varying quality and features prominently in the museums along the route. The four pictures presented here are his masterpieces and belong to distinct stylistic phases.

Spring explores Grohar’s enduring hope for a better future, not just his but the country’s, too.

It marks the maturation of Grohar’s divisionist phase (1902-1904), like Larch, a rectangular picture Grohar cropped into a square secessionist format.

The Štemarje Yard marks his pronounced impressionist phase (1904-1906). The Sower, immediately recognized as a nationally important painting when it was first exhibited in Trieste in 1907, represents a short reflective symbolist phase. 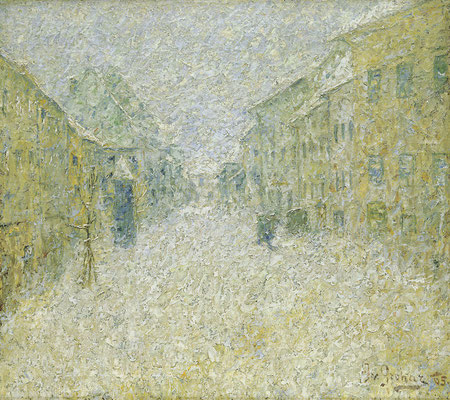 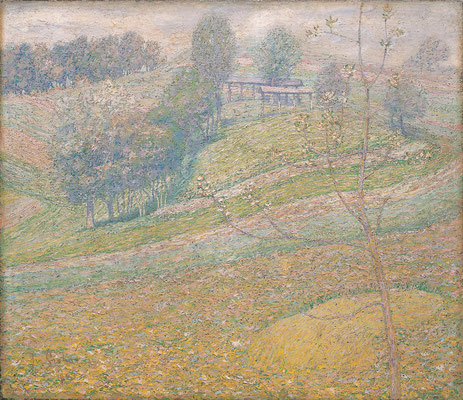 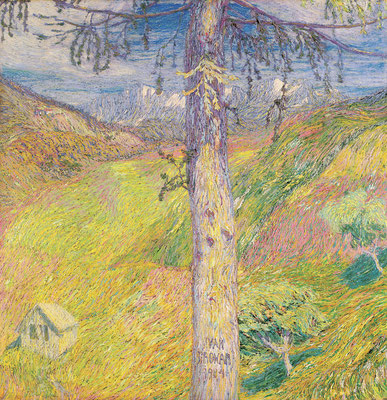