Eugène Boudin was born at Honfleur in a family of sailors according to the town census. His family set up in Le Havre in 1835. After he was going with his father to sail, he opened a picture-framer shop from 1844 to 1846. He showed his first drawings to the Norman Jean-François Millet when this one went in Le Havre, then he was advised in painting by Thomas Couture, Master of Academism.

In the same time he followed the teaching of Le Havre drawing school and travelled in Belgium and the Netherlands where he discovered the flemish painters.

Thomas Couture, Constantin Troyon and the writer Alphonse Karr helped him to get a scholarship from his town to study in Paris where he painted in the Louvre following the lessons of Eugène Isabey workshop.

In 1858 Monet, who was seventeen years old, showed his caricatures of local personalities in the shop window of the paper-seller Gravier and in this place he met Boudin who engage him to work outdoors in the surrounding of Le Havre.

In 1859, Boudin, for the first time, showed his canvas at the parisian Salon where the writer Charles Baudelaire admired his skies about which Camille Corot affirmed: Boudin was “the king of the skies”.

Up to 1860 Boudin began to represent Trouville and Deauville beaches; this theme gave him a beginning of notoriety: the fashion of sea baths invited parisian hight middle-class to come in summer on the Normandy seaside in the footprint of the Duc de Morny, half-brother of Napoleon III who have created Deauville resort.

Although his attachment to the Normandy where he worked regularly, the artist traveled in Britain since 1855 and, some years after in 1863, he married a breton woman, Marie-Anne Guédès, born near Brest.

Since 1870, he travelled also in the north of France, returned in Belgium and in Netherlands, then, invited by an art collector, he set up in Bordeaux between 1873 and 1880.

Deeply touch by the death of his wife in 1889, Boudin went to the Mediterranean seaside every winter. He painted the Côte d’Azur (Antibes, Juan-les-Pins, Beaulieu and Villefranche-sur-Mer…) where he particularly appreciated “the brightness of the light”.

Five years later he visited Venice on the Felix Ziem foot-prints and realized a considerable task: “I didn’t come to walk here, I began to work I should want to have less than twenty years to do a usefull stay for me and art”.

He wanted to die in front of the sea; his wish was realized in his Deauville Villa in august 1898.

Eugène Boudin was a real precursor of the Impressionists as Claude Monet said: “If I was a painter, it’s thanks to Boudin”: he participed regularly at the impressionist expositions from 1874. 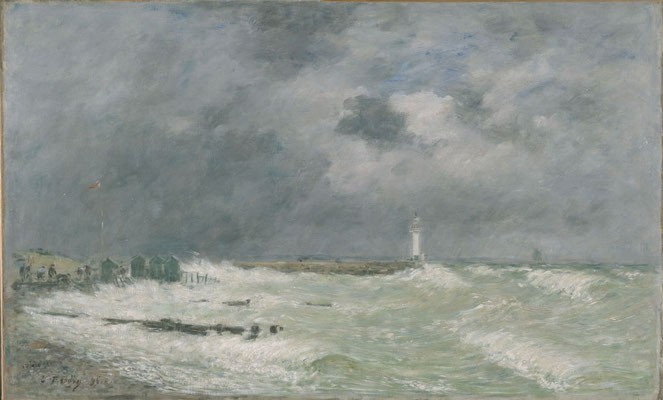 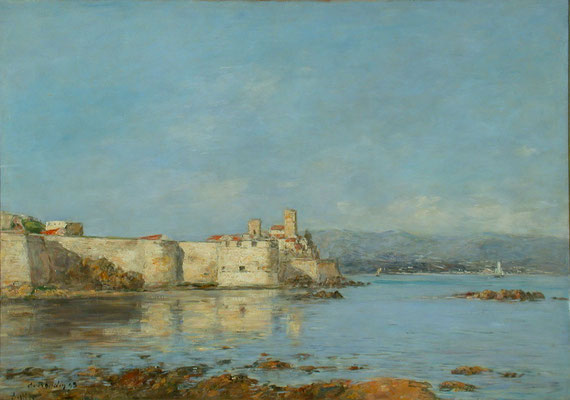